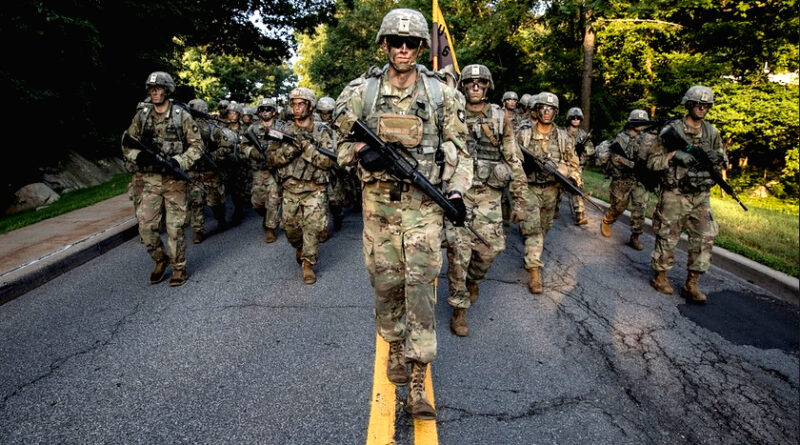 By David Vine
From Washington DC

Amid renewed fear mongering about an “invasion” at the U.S.-Mexico border, this week’s 175th anniversary of the 1846–1848 war the U.S. government instigated with Mexico is a reminder that throughout U.S. history, invasions have gone almost exclusively from north to south, not vice versa. A near-continuous series of invasions—military, political, and economic—moving from north to south has helped produce the poverty, violence, and insecurity driving people to migrate from south to north. The current humanitarian crisis at the border, with record numbers of unaccompanied minors desperately fleeing violence, insecurity and poverty, reveals the consequences of an interventionist policy that’s even older than the U.S.-Mexico war.

To be honest, interventionist is an all-too-common euphemism for imperialist invasions. The first invasion came in 1806 when U.S. military forces entered Mexican territory (then still controlled by Spain) and established a military base in today’s Colorado. In total, including the 1846–1848 war that resulted in the U.S. government seizing nearly half of Mexico, the U.S. military has invaded Mexico at least ten times.[1] Across Latin America, U.S. forces have invaded southern neighbors more than 70 times, leaving occupying armies for months, years, and in some cases decades.[2]

Today the U.S. State Department acknowledges that U.S. troops instigated the war with Mexico.[3] In early 1846 President James Polk deployed forces into disputed territory along the Rio Grande River. “We have not one particle of right to be here,” U.S. Colonel Ethan Allen Hitchcock wrote from near the river. “It looks as if the government sent a small force on purpose to bring on a war, so as to have a pretext for taking California and as much of this country as it chooses.”[4] After fighting ensued, Polk used what he knew to be false claims that Mexico had “invaded our territory and shed American blood on American soil” to win a Congressional declaration of war.[5]

Once the war started, many U.S. soldiers questioned the invasion of a neighbor posing no threat to the United States. Angry volunteer troops from Virginia, Mississippi, and North Carolina mutinied. Thousands of soldiers deserted. Several hundred Irish-American soldiers switched sides to fight for Catholic Mexico in the San Patricio Battalion. Casualty rates were unusually high for U.S. forces. They were higher still for Mexicans, including civilians subjected to U.S. bombardment and wartime atrocities. Commanding generals inflicted “extravagant violence” against Mexicans, following the pattern of scorched earth-style warfare employed against Native American civilians.[6] “Murder, robbery, & rape on mothers and daughters, in the presence of the tied-up males of the families, have been common all along the Rio Grande,” reported U.S. General Winifred Scott in 1847.[7] A young soldier at the time, future general and president Ulysses Grant said, “I do not think there was ever a more wicked war than that waged by the United States on Mexico.”[8]

When U.S. and Mexican officials signed a treaty to end the war in 1848, the U.S. government took almost half of Mexico’s pre-war territory. This included around 525,000 square miles that today are the U.S. states of Arizona, Utah, Nevada, and California, and parts of New Mexico, Colorado, and Wyoming. President James Polk had wanted even more territory: he had plans to invade the Yucatán Peninsula (and also hoped to buy Cuba from Spain).[9] Some expansionist Democrats in Polk’s party pushed for annexing all of Mexico. They were among a group of southerners who dreamed of expanding the United States’ growing North American empire into the Caribbean, Central America, and Mexico based around enslaved labor and new slave-holding territories. Some led “filibustering” campaigns— private military invasions—in the 1850s into Mexico and Central America, although all failed.[10]

From Mexico to Nicaragua to Panama and Beyond

The most infamous of the filibusters was William Walker. Walker led a private army, mostly composed of southerners, in an 1853 invasion of Mexico’s Baja Peninsula. He declared himself president of what he called the Republic of Sonora. After Mexicans forced him to retreat to California, Walker led at least six separate campaigns into Nicaragua between 1855 and 1860. For a brief period, he declared himself president of Nicaragua, earned recognition from U.S. President Franklin Pierce, declared English the national language, legalized slavery, invaded Costa Rica, and announced his intention to take over all of Central America. Twice, the U.S. Navy captured him and returned him to the United States; in 1859, the administration of President James Buchanan ordered him released. Walker soon landed in Honduras during another attempt to take over Nicaragua. This time, Hondurans captured Walker, tried and executed him with a firing squad.[11]

During the U.S. war with Spain of 1898, U.S. troops conquered Cuba and Puerto Rico, as well as the Philippines. U.S. officials turned Puerto Rico into a colony while officially granting Cuba its independence. In practice Cuba became a quasi-colony. To a greater extent than even the Panama Canal Zone, Guantánamo Bay became a U.S. colony, camouflaged by a U.S.-imposed “lease” that has no end date and that can only be terminated with the agreement of both governments. This arrangement amounts to an eviction-proof lease.

In 1901 U.S. officials also inserted an amendment into the new Cuban constitution allowing U.S. troops to invade at will. They soon did. An “Army of Cuban Pacification” occupied the island for almost three years in 1906-1909. U.S. forces occupied the country again in 1912 and for five years in 1917-1922.

President Franklin Roosevelt’s “Good Neighbor” policy of the 1930s brought a brief pause in the invasions and occupations. After World War II, however, new, increasingly covert U.S. invasions largely replaced the overt wars and occupations. These invasions included CIA-backed coups in Guatemala, the Dominican Republic, and Chile; weapons, training, and logistics support for right-wing forces in Central America’s horrific civil wars of the 1980s; Plan Colombia-style military deployments amid the “war on drugs”; and a growing number of U.S. military bases in the region. U.S. support for recent coups and coup attempts in Honduras, Bolivia, and Venezuela illustrates the persistence of such strategies.

U.S. military and CIA invasions into Latin America always have been matched by U.S. economic and corporate invasions, as Mexico demonstrates. Following the end of the war that began in April 1846, Mexico became as much of an economic dependency of the United States as it had been to its Spanish colonizer: mines were controlled by U.S. firms; railroads were designed to ship the wealth of the mines from south to north; the oil industry was dominated by Rockefeller, Mellon, and other oil giants; the peso was pegged to the dollar; Mexico was deeply indebted to U.S. banks.[17] While Mexico has more power now relative to its northern neighbor than it did in the early twentieth century, the pattern of northern dominance largely has persisted.

Much of Central America and some other parts of Latin America have remained far more dominated by the United States than Mexico. There’s a reason that Honduras was the model for writer O. Henry when he coined the term “banana republic”: Honduras was under the near-complete control of U.S. banana companies and their political and military muscle, the U.S. government. Perhaps distracted by the clothing brand, many forget the original meaning of the term “banana republic”: a weak, impoverished, marginally independent country facing overwhelming foreign economic and political domination. In other words, a de facto colony—which is what Honduras and some other Latin American countries became in the twentieth century; in some cases they remain so today.

The U.S. government and U.S. corporations are not solely responsible for the violence, poverty, and insecurity that are at the root of today’s migration from Latin America to the United States. Other government and corporate actors within and beyond the region also bear responsibility. They include corrupt national leaders, European governments, and European, Canadian, and Asian corporations that have shaped Latin America through history.

One hundred and seventy five years after a U.S. president instigated a war with Mexico that resulted in the seizure of California and other lands that have been major sources of U.S. wealth, the current U.S. president and others in the United States should acknowledge the disproportionate role that U.S. leaders have played in invading and plundering to the south as well as the role these invasions and plunder have played in spurring mass migration northward.

Beyond recognizing U.S. culpability, President Biden has a historic opportunity to repair some of the damage our country has caused and stop causing more harm. This means abandoning the immoral and largely ineffective strategy of President Trump and his two presidential predecessors to outsource immigration control to the military and police forces of southern neighbors.[18] It means admitting tens of thousands of Latin American asylum seekers per year as a start of paying off a long-owed “imperial debt.”[19] If Biden is serious about addressing the “root causes” of migration, he and Vice President Kamala Harris must go beyond  pitifully small increases in humanitarian aid to Central America[20] to end more than 200 years of military, political, and economic invasions that are at the root of those root causes. 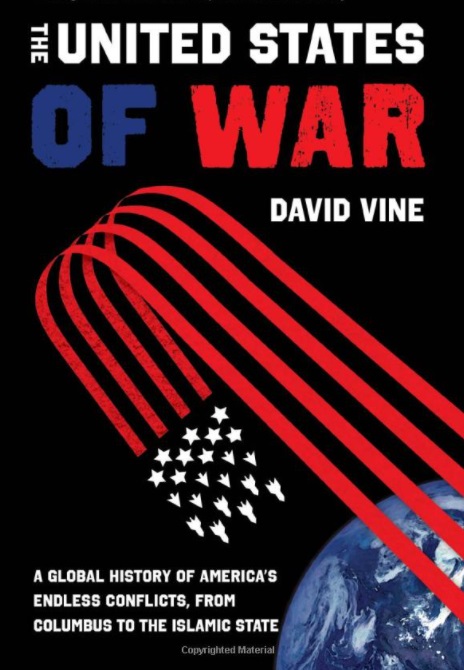 David Vine is Professor of political anthropology at American University in Washington, DC. This article is adapted from Professor Vine’s new book The United States of War: A Global History of America’s Endless Conflicts, from Columbus to the Islamic State (University of California Press). David Vine is also the author of Island of Shame: The Secret History of the U.S. Military Base on Diego Garcia (Princeton University Press, 2009) and Base Nation: How U.S. Military Bases Abroad Harm America and the World (Metropolitan/Henry Holt, 2015). See davidvine.net and basenation.us for more information.

[2]  “Instances of Use of United States Armed Forces Abroad, 1798-2020,” https://fas.org/sgp/crs/natsec/R42738.pdf; The United States of War: A Global History of America’s Endless Conflicts, from Columbus to the Islamic State,

[5] A Nation Without Borders: The United States and Its World in an Age of Civil Wars, 1830-1910, https://www.penguinrandomhouse.com/books/529359/a-nation-without-borders-by-steven-hahn/.

[7] “The April Invasion of Veracruz,” https://www.nytimes.com/2014/04/21/opinion/krauze-the-april-invasion-of-veracruz.html.

[9] What Hath God Wrought: The Transformation of America, 1815-1848, https://www.google.com/books/edition/What_Hath_God_Wrought/TTzRCwAAQBAJ?hl=en&gbpv=0.

[10] E.g., Building the Continental Empire: American Expansion from the Revolution to the Civil War, https://rowman.com/ISBN/9781566631365/Building-the-Continental-Empire-American-Expansion-from-the-Revolution-to-the-Civil-War; “From Old Empire to New,” https://uwpress.wisc.edu/books/4453.htm.

[11] William Walker’s Wars: How One Man’s Private American Army Tried to Conquer Mexico, Nicaragua, and Honduras, https://www.chicagoreviewpress.com/william-walker-s-wars-products-9781613737293.php; Empire in Retreat: The Past, Present, and Future of the United States, https://yalebooks.yale.edu/book/9780300210002/empire-retreat; “William Walker: King of the 19th Century Filibusters,” https://www.historynet.com/william-walker-king-of-the-19th-century-filibusters.htm.

[12] Building the Continental Empire: American Expansion from the Revolution to the Civil War, https://rowman.com/ISBN/9781566631365/Building-the-Continental-Empire-American-Expansion-from-the-Revolution-to-the-Civil-War; Historical Atlas of Central America, https://www.oupress.com/books/9780699/historical-atlas-of-central-america.

[14] Historical Atlas of Central America, https://www.oupress.com/books/9780699/historical-atlas-of-central-america; Emperors in the Jungle: The Hidden History of the U.S. in Panama, https://www.dukeupress.edu/emperors-in-the-jungle.

[15] Emperors in the Jungle: The Hidden History of the U.S. in Panama, https://www.dukeupress.edu/emperors-in-the-jungle; Historical Atlas of Central America, https://www.oupress.com/books/9780699/historical-atlas-of-central-america; The Martinez Era: Salvadoran-American Relations, 1931-1944, https://digitalcommons.lsu.edu/gradschool_disstheses/3002/.

[18] “Biden’s Plan for Central America Is a Smokescreen,” https://www.thenation.com/article/world/biden-central-america-immigration/.

[20] “The Biden Plan to Build Security and Prosperity in Partnership with the People of Central America,” https://joebiden.com/centralamerica/.