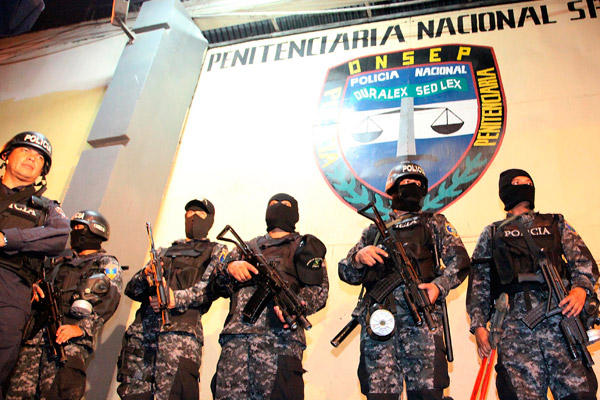 In a highly controversial move, the newly minted chief of Honduras’ national police force, Juan Carlos Bonilla Valladares, has announced that 4,000 police officers will be discharged from the force in an attempt to purge it of the endemic corruption and impunity that has plagued the country.(1) This decision follows last week’s swearing-in of Bonilla, commonly known as ‘El Tigre,’ and last month’s firing of Ricardo Ramirez del Cid due to allegations linking him to the killing of Alfredo Villatoro. Reports claim that police were involved in the murder of Villatoro, a close confidant of President Porfirio Lobo.(2)

These recent sordid events have two main implications. Bonilla has had his own issues with corruption and impunity, which should cast immediate doubt on the integrity of the purge. More immediately, the loss of a large quantity of police officers in Honduras may have devastating consequences for the security of Hondurans.

President Lobo has received some praise for this appointment. Long-time critic of Honduras’ human rights record Ramon Custodio has said that Bonilla’s appointment sends the right message about the president’s commitment to fighting crime.(3) The new chief has been given a formidable amount of power, as demonstrated by the dismissal of the 4,000 officers, as well as his ability to dismiss any member of the national police who refuses to undergo a background check.

Ironically, Bonilla has been accused of the same iniquity that he pledges to eradicate from the police force. In a report released 10 years ago by former State Prosecutor Maria Luisa Borjas, Bonilla was accused of killing three people and named as a suspect in the murders of 11 others. Bonilla was formally charged in only one of these cases, but legal action was halted when law enforcement officials refused to cooperate with the prosecutor. All charges against Bonilla were subsequently dropped after Borjas’ husband was attacked and Borjas received multiple death threats from unknown assailants thought to be operating on behalf of Bonilla.

Since then, Bonilla has become a vocal champion for the prosecution of corrupt police officials, trumpeted a call to crack down on drug traffickers, and cultivated a reputation for being a patriot dedicated to peace and social stability in Honduras. Prior to his appointment, Bonilla served as the police liaison to the Honduran military establishment, where he sought to improve police coordination with the military in order to fight rampant crime in the country. But questions surrounding Bonilla’s shadowy record—including accusations of complacency, corruption, and murder—remain unaddressed. If Bonilla’s personal history is not further investigated, questions regarding the legitimacy of his cleansing exercise will haunt his tenure like an inescapable dark cloud, impeding the progress toward justice and peace in Honduras.

Considering that Honduras faces a murder rate four times higher than Mexico, Latin America’s poster child for violence, this may be an inopportune time to dismiss more than a quarter of the Honduran national police force. If such efforts further reduce the already-depleted capacity of the police to combat organized crime, the purpose of the mass discharge will prove self-defeating. Dismissing existing officers, while simultaneously attempting to hire and train competent replacements, will be expensive and most certainly result is a loss of experience and skill. Additionally, many officers discharged for criminality will have no outlet for employment and be forced into a life of crime in order to feed their families.

Both President Lobo and Juan Carlos Bonilla could take measures in the interim to assuage the problem. President Lobo can begin a police veracity commission, empowered by the National Congress, charged with investigating police malpractice. To ensure the commission is transparent and responsive to the public, Lobo would need to appoint an individual of high integrity to chair the commission—preferably someone with a cleaner record than Bonilla. The commission would be headed by three co-chairs—representing the Honduran people, the legislature, and the police force—who would oversee the hearings and present recommendations to the new police chief. Such a commission would ensure that the national police force is empowered to tackle systemic corruption.

The commission should merge into a permanent committee responsible for investigating accusations of police corruption, brutality, and impunity brought to them by the public. These investigations should occur in a transparent manner in order to make public examples of the officers found guilty. The National Congress of Honduras should have statutory control over this commission, and review reports of its progress. By following these steps, the Honduran government can begin to address the underlying causes of corruption and impunity without risking the potential collapse of domestic security that will almost inevitably come about as a result of the massive police discharges.

Honduras’ security problems are dire. While the country suffers from the highest murder rate in the world and a lawless prison system, Honduran turf has become a major port for international drug trafficking. Although the U.S. State Department has claimed that Drug Enforcement Agency (DEA) involvement in anti-drug efforts in Honduras has produced results, evidence stacks up to the contrary. By focusing on kilograms of drugs seized in joint counternarcotics operations, officials lose sight of the lives lost in the process. Just last month, four Honduran citizens, including two pregnant women, were killed on the Patuca River, in the country’s Mosquitia region, during an operation conducted by DEA-Honduran joint forces. The DEA maintains that they were only returning gunfire that came from the boat, and refuses to conduct a legitimate investigation.

It is time for the Honduran government to take control of the country’s fate. It should send the U.S. State Department a strong message that, although U.S. technical and financial assistance is appreciated, the United States needs to respect Honduran sovereignty. However, the Honduran government cannot take this step while members of its own law enforcement are getting away with murder and the Honduran national police force is infected with chronic corruption. Firing nearly a third of the force is only a temporary stopgap solution to a long-term, systemic problem. Bonilla demonstrated a commitment to ending the current status quo during his previous assignment as commander of the Copàn police department, but if ‘El Tigre’ wants to prove that he is serious about a shakedown of the force, he must take steps to actively discourage corruption in the security forces. He can do this by calling for a police veracity commission. This symbolic and substantive measure could go a long way in reducing impunity in the police force, and could lead to a brighter future for Honduras.