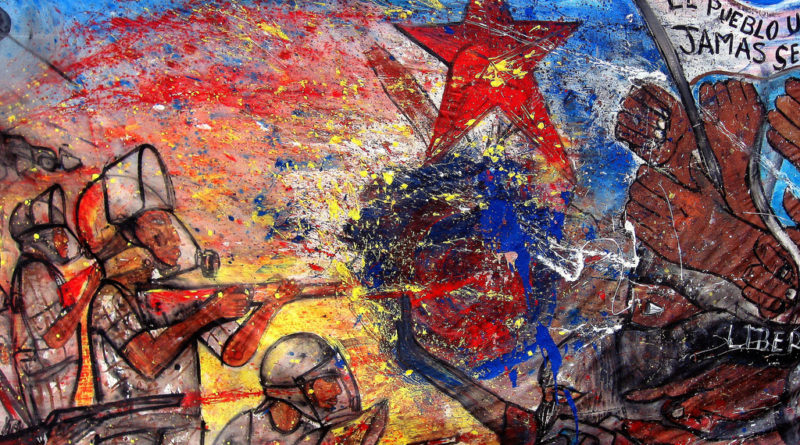 On June 19, clashes between state police, federal police, and protestors in multiple municipalities in Oaxaca resulted in 21 arrests (or disappearances), over 100 injured individuals (53 civilians and 55 police officers), and the death of ten civilians.[1] Other sources such as El Resumen Latinoamericano, reported up to 12 deaths.[2] Protestors were members and supporters of the militant teachers union, la Coordinadora Nacional de Trabajadores Educativos (The National Coordinator of Education Workers; CNTE), which has been protesting Mexican President Enrique Peña Nieto’s 2013 education reform. Such reform entails mandatory teacher evaluations, in addition to other heavily contested measures. Protests have intensified in recent days due to the arrests of two CNTE leaders, Ruben Nuñez and Francisco Manuel Villalobos Ricardez on June 12 and June 11, respectively. Members of the CNTE dispute the charges: Nuñez was charged with money laundering and Villalobos was charged with aggravated robbery for the theft of textbooks. The CNTE views these arrests as an attempt by the Mexican government to disrupt their protests by removing key CNTE leadership.[3]

The June 19 protests included protestors throwing stones and Molotov cocktails, burning cars and trucks, and even setting up road barriers with burning tires. The majority of the violence and deaths took place just north of Oaxaca’s capital in Nochixtlán. In addition to the eight deaths in Nochixtlan, unknown gunmen killed two others, including a journalist for El Sur Diario Independiente del Istmo, a local news source in the region.[4] The Mexican government claimed that its agents were not carrying guns and that the gunfire came from beyond the blockades by masked individuals who were unaffiliated with the CNTE or the police. Yet, the Associated Press has footage of one of a police officer (state or federal is yet to be determined) repeatedly firing their gun at demonstrators.[5] Mexican authorities verified this version of events and are now looking into the police and their role in the killings.[6] Whether the arrests of Nuñez, Villalobos, and at least 21 others were really forced disappearances has yet to be confirmed by any human rights organization.[7] According to union member, Juan García, the Oaxaca governor, Gabino Cué Monteagudo, had the opportunity to resolve the conflict peacefully by initiating a dialogue between the Mexican government and the CNTE. Many members of the CNTE no longer believe Cué has the political capacity to handle the current situation.[8] Protests are also affecting the region’s supply of gasoline, diesel, and jet fuel. Pemex, a Mexican state oil company, is cut off from many of its plants and distribution centers due to road blockages. This could lead to fuel shortages leading to other problems in Oaxaca.[9]

During an annual teacher’s strike in Oaxaca City in May 2006, the Sindicato Nacional de Trabajadores de la Educación (the National Education Workers Union; SNTE) called for the removal of Oaxaca Governor Ulises Ruiz Ortiz. The strike got increasingly violent, and employed tactics that are similar to the ones being used by the CNTE today. The height of these protests came on October 27, 2006, when protestors and uniformed gunmen began shooting at each other. A U.S. journalist and two local residents were killed by the gunmen, one of whom was a paramilitary. This event led to widespread unrest in Oaxaca, leading to nine deaths after a confrontation on October 29. In November, protestors were arrested and sent to prison, and murder rates increased throughout the state with the finding of dead bodies becoming a common occurrence, which contributed to an “uncountable” death toll as well as multiple disappearances.[10]

One of the most violent protests in recent Mexican history, the 2006 SNTE Oaxaca protests served as a frightening reminder for what may come in future violent standoffs between members of the CNTE and the police. The Congreso Nacional Indígena (National Indigenous Congress) and the Ejército Zapatista de Liberación Nacional (the Zapatista National Liberation Army) released a statement on June 20, demanding the government to release all prisoners and disappeared people. Both southern-based indigenous groups indicate that the ‘education reform’ that the CNTE is protesting is nothing more than a piece of legislation used to push a capitalist neoliberal agenda onto all of Mexico, primarily on the states of Oaxaca, Chiapas, Guerrero, and Michoacán.[11]

Given the violent history of police aggression towards teachers unions, claims of police disappearing the arrested protestors are believable. The police are being accused of forcibly disappearing union members and students only a few weeks after the Grupo Interdisciplinario de Expertos Independients (Interdisciplinary Group of Independent Experts; GIEI) rendered its report on the Ayotzinapa massacre. The GIEI’s mandate also released policy recommendations on the issue of forced disappearances, however, it seems like the Mexican government is ignoring these recommendations.[12] On June 21, The Office of the United Nations High Commissioner (OHCHR) called for an investigation regarding the deaths in Nochixtlán, as well as a dialogue between the government and the CNTE. On June 22, a meeting will be held at Mexico’s interior ministry’s headquarters. Although this is a peaceful step forward, Education Minister Aurelio Nuño, who has always taken a tough stance against the CNTE, says that solely the restoration of peace in Oaxaca will be discussed, not education reform.[13] With Peña Nieto’s education reform being the CNTE’s primary grievance and focus of their protests for the last three years, it is doubtful that any real progress towards peace will be made. As stated by Nuño, the “education reform process will continue, it will not stop.”[14]

[9] Gallón, Natalie and Joshua Berlinger. “8 killed in Mexico during clash between residents, teachers and police.”